Tax Issues in the Use or Disposition of International Intangibles: The Good, the Bad, and the Ugly (Part I)
09.09.2021Kenneth S. Levinson 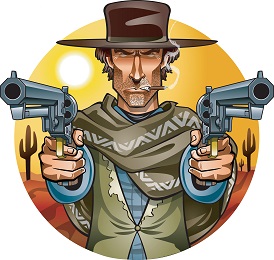 The transfer or use of intangibles generally is a complicated area of taxation, and one that continues to evolve (see my colleague Kyle Brehm’s highly informative blog post regarding state taxation issues of SaaS). In the international arena, tax issues get even more complex and nuanced when transfers or use of e-commerce and intangible rights cross borders. But you knew that -- just as Clint Eastwood did when he brought his gun-fighting “know-how” to Mexico…

First, is the intangible right being sold or licensed, or is it a service being performed for a customer? Here things get interesting, at least for tax geeks. It’s not always clear, but the tax implications can greatly vary depending on the characterization. If the documentation and intent of the parties is to transfer all right, title and interest to a product or intangible, and particularly if the intent is to allow the recipient to do essentially whatever they want with the asset subsequently, it’s likely a sale for tax purposes. Think sales of shrink-wrapped software, acquisition of digital movies, etc.

In the case of a transfer of less than all of the “bundle of sticks” comprising legal ownership, there is inherently some type of circumscribed use authority conveyed to the recipient, such as use for a specified time period or geography, or for some stated limited authority to include/incorporate the intangible right into a product or other limited permitted use by the recipient. These situations generally constitute licenses for tax purposes, and the source of the income received by the licensor is generally where the ecommerce or intangible right is used.

Second, if it is a “sale,” what is the tax characterization and the source of that gain (or loss) to the seller?  Section 197 Intangibles (which include copyrights, patents, trademarks/trade names, know-how, customer lists, etc.) have particular US tax rules associated with them. In general, if sold individually, and held by the seller longer than a year, they are usually Section 1231 property and eligible for capital gain/ordinary loss treatment, except for patents: they are generally treated as long-term capital gain or loss under Section 1235. The source of a sale of such intangible property/rights under US law is generally the tax residence of the seller.

What happens if the buyer is in a foreign country and the seller is here in the US?  Setting aside otherwise essential analysis regarding permanent establishments or tax nexus abroad of the US seller entity, the fact is that there are risks that the foreign country of the buyer could assert tax jurisdiction over the gains or proceeds from the “local” purchase transaction, and may also seek to impose VAT on such a sale. So, be sure to get local advice.

Third, this brings us to “sales” of intangible rights with uncertain or contingent sales prices, such as those whose value is based on future contingencies (e.g., future payments for gains that are “contingent on the productivity, use or disposition” of the intangible property right). The presence of this language in many US tax treaties creates a number of traps for the unwary.

The technical distinction between a legal sale or license of an intangible in cases where all of the ownership “bundle of sticks” may or may not have been conveyed to the buyer will not be as relevant under such treaty provisions dealing with intangibles. All  future contingent payments for such “gains” by the US party with respect to that intangible property are going to be treated under that treaty’s royalty provisions. In other words, the US recipient in these cases will be subject to continuing gross withholding tax on those future payments of gains if the receipt of additional proceeds looks to future productivity, use or disposition.

The real, and underappreciated, problem is to substantiate the amount of “gain” being paid by the local payor. Generally, “gain” implicitly connotes a tax-free return of basis by the “seller” with tax being imposed only on the incremental proceeds; but this distinction is not often addressed in international documentation regarding a sale of intangibles between buyer and seller where “gain” language is included in the treaty’s royalty provision. There are ways to structure or document this distinction between basis and incremental gain when such contingent future payments are involved, but suffice it to say that intangible transactions priced/documented in this contingent way will produce exposure to continuing, locally taxable royalties to the US seller/recipient.

Tune in next week for Part Deux…