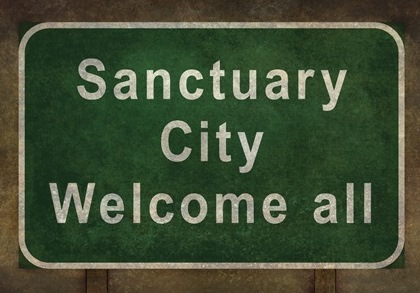 The January executive order stated, “Sanctuary jurisdictions across the United States willfully violate Federal law in an attempt to shield aliens from removal from the United States. These jurisdictions have caused immeasurable harm to the American people and to the very fabric of our Republic.” The executive order said, among other things, that the policy of the executive branch is to “[e]nsure that jurisdictions that fail to comply with applicable Federal law do not receive Federal funds, except as mandated by law.” The order further said that the Secretary of Homeland Security has the authority to designate a jurisdiction as a sanctuary jurisdiction, and that the attorney general can take “appropriate enforcement action” against any entity that “has in effect a statute, policy, or practice that prevents or hinders the enforcement of Federal law.”

The counties challenging the executive order argued that the relevant provision of the Trump executive order violated the separation of powers doctrine in the Constitution because it improperly sought to wield congressional spending powers. The counties said it was so overbroad and coercive that even if the president had spending powers, the executive order would clearly exceed them and violate the 10th Amendment’s prohibition against commandeering local jurisdictions. Further, the counties argued that the provision was so vague that it violated the Fifth Amendment’s Due Process Clause and was void for vagueness. And because it sought to deprive local jurisdictions of congressionally allocated funds without any notice or opportunity to be heard, it violated the procedural due process requirements of the Fifth Amendment.

The federal government responded that the counties could not demonstrate that the executive order’s sanctuary provision was invalid under all circumstances. It also claimed, among other things, that the provision was consistent with the Constitution’s separation of powers and did not apply to funding in which the county might have a constitutionally protectable interest.

The court noted that the provision in question, by its plain language, attempted to reach all federal grants. The rest of the executive order was broader still, the court noted, addressing all federal funding. And if there was any doubt about the scope of the executive order, the court observed, the president and Attorney General “erased it with their public comments.” The court noted that the president has called the order “a weapon” to use against jurisdictions that disagree with his preferred policies of immigration enforcement, and his press secretary reiterated that the president intends to ensure that “counties and other institutions that remain sanctuary cites don’t get federal government funding in compliance with the executive order.” The attorney general has warned that jurisdictions that do not comply would suffer “withholding grants, termination of grants, and disbarment or ineligibility for future grants,” and the “claw back” of any funds previously awarded, the court noted.

The court said that the Constitution vests spending powers in Congress, not the president, so the executive order “cannot constitutionally place new conditions on federal funds.” Further, the court noted, the 10th Amendment “requires that conditions on federal funds be unambiguous and timely made; that they bear some relation to the funds at issue; and that they not be unduly coercive.” Federal funding that bears no meaningful relationship to immigration enforcement “cannot be threatened merely because a jurisdiction chooses an immigration enforcement strategy of which the president disapproves,” the court said. Because the executive order violates the separation of powers doctrine and deprives the counties of their 10th and Fifth Amendment rights, the court granted the counties’ motions for summary judgment and permanently enjoined the defunding and enforcement provisions of the executive order.

Additional details on sanctuary jurisdiction cases, including links to this decision and other related decisions, are here.