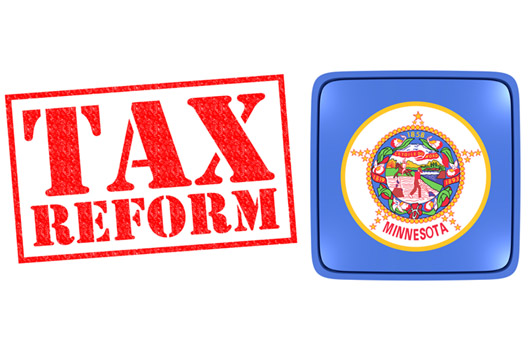 UPDATE (April 19, 2018): Big news since our update last week: Governor Dayton launched another salvo in the protracted battle over implementing federal tax reform at the state level with HF 4385. The Governor’s plan provides generous tax relief to individuals by changing the starting point for calculating Minnesota income taxes from federal taxable income to adjusted gross income, expanding the Working Family Credit, creating a new $60 personal and dependent tax credit, and allowing individuals to itemize deductions on their state tax return even if they take the larger standard deduction on their federal return. The bad news for businesses is that they are going to have to foot the bulk of the bill. Businesses need to know that the Governor’s proposal:

Governor Dayton’s goal is to provide more income tax relief at the state level to individuals based on his belief that the federal tax cuts are skewed toward businesses. Not surprisingly, Republican lawmakers are pushing back. Given that the legislative session ends in May it is hard to see how the two parties will reach any consensus. Check back on our website here for a full report and analysis if and when a bill gets passed.

UPDATE (April 11, 2018): After taking its week-long hiatus from Minnesota capitol, the Minnesota Legislature is back in session and continuing its tax battle preparations.

Here is an update as to where the Legislature is with regard to bills introduced to conform Minnesota’s business income tax laws to various aspects of federal income tax reform under the Tax Cuts and Jobs Act (the TCJA):

We will continue to update details of the above legislation and any new legislation as it makes its way through the Legislative process. Please revisit this page for further updates.

It was not long ago when Congress passed the Tax Cuts and Jobs Act (TCJA), dramatically rewriting the U.S. tax code and making sweeping changes impacting both businesses and individuals. Now that the dust is beginning to settle, the battle has shifted from Washington, D.C. to state capitols as lawmakers grapple with how to conform their tax systems to the TCJA. While this process is fraught with longstanding partisan divisions over tax policy, it is a generational opportunity for state lawmakers to craft a tax regime that is both pro-growth, focused on reducing rising income equality and investing in shared public priorities, such as education and infrastructure. Striking the right balance presents a unique challenge to lawmakers because, unlike the federal government, the vast majority of the states, including Minnesota, need to balance their budgets.

State tax returns are linked to federal returns in some way, so when the tax code is changed at the federal level, states must make conforming changes for both budgetary and administrative reasons. States have one of three tools in their tool boxes to accomplish this task. They either conform to the U.S. tax code as of a fixed date, which is the old code if there has been a change in law, conform to the code that is currently in effect, or conform to just specific sections of the code, either currently in effect or as of a specific date. States that conform to the code on a rolling basis automatically incorporate all the federal changes and then duke it out over what to leave out. States that conform as of a specific date, or to just specific sections of the code, battle over when, how and what to conform. In either system, there is a chess match among the politicians and the various interest groups to make sure they receive the lion’s share of the benefits when there is a tax cut or are inflicted the least amount of pain when there is a tax hike. But this time is much more important because of the magnitude and scope of the TCJA and because it will generate a significant amount of revenue at the state level. This will force lawmakers into tough choices over whether to make their tax codes more competitive, offer greater relief to low- and middle-income tax payers, pocket the money for a rainy day, or spend on specific projects.

Minnesota is one of 19 states that conform to the code at a fixed date, which means that the governor and the legislature are currently scrambling to pass a budget before the end of this legislative session that accounts for the TCJA’s revenue impact to the state’s coffer. The Minnesota Department of Revenue estimates that if lawmakers do nothing, it will lead to an approximately $850 million increase in revenues over the current two-year budget cycle and an additional $1.5 billion over the following cycle. Minnesota business leaders need to pay close attention to this budget process. In particular, they should keep their eye on how state lawmakers conform to the following changes from the TCJA:

The TCJA provided the largest tax cut to corporations in history, reducing corporate rates from 35 percent to a flat 21 percent and eliminating the corporate alternative minimum tax (AMT). As a result, Minnesota lawmakers could consider raising the current 9.8 percent state corporate tax rate given the reductions at the federal level, or they may choose to go the other direction and lower the rate given it is already one of the highest in the nation and only accounts for a fraction of state revenues. Yet another option would be to impose a graduated tax rate to give smaller corporations a break. Repealing the corporate AMT at the state level presents another conundrum because the state AMT tracks the same formula for calculating the federal AMT.

Minnesota businesses need to pay close attention to what lawmakers decide, since it will figure into their calculus in determining whether to conduct business through a C corporation (C-Corp) or a pass-through entity, such as an LLC or S corporation. Prior to the TCJA, the high tax rate and double taxation of C-Corps made the choice to operate through pass-through entities fairly easy. However, now shareholders of C-Corps are only taxed at a maximum effective federal rate of 41 percent (21 percent at the corporate level plus 20 percent at the shareholder level for qualified dividends), whereas income flowing through pass-through entities is subject to a maximum 37 percent rate (40.8 percent for passive investors subject to the 3.8 percent net investment income tax). The effective rate for C-Corps is further reduced on account of the fact they can fully deduct state taxes, whereas individual deductions are capped. To make things more complicated, the TCJA provides a 20 percent deduction against taxable income for “qualified business income” from pass-through entities. But this deduction is not available for individuals with incomes in excess of certain threshold amounts, and the lower individual tax rates and qualified business income deduction expire at the end of 2025. There are also other factors to consider, for instance whether the business is slated to be sold, generates significant losses or plans to reinvest profits. The bottom line is there is no longer a one-size-fits-all approach, and Minnesota business owners need to see what happens at the state level before crunching the numbers and selecting a particular business entity.

The TCJA limits the amount of interest paid to both related and unrelated lenders that can be deducted by any business with gross receipts of $25 million to 30 percent of adjusted taxable income (defined similar to EBITDA). Partnerships will apply this limitation at the entity level, and U.S. consolidated groups will apply the limitation on a group-wide basis. Deductions that are disallowed can be carried forward indefinitely. Minnesota lawmakers need to consider whether they will adopt similar limitations on interest deductibility and whether the limitation will be determined on a consolidated basis.

The TCJA only permits net operating losses (NOLs) to reduce 80 percent of taxable income for any year. Further, the TCJA does not permit NOLs to be carried back, but they can be carried forward indefinitely. Minnesota only permits NOLs to be carried forward 15 years, so lawmakers need to decide whether to provide for unlimited carry-forwards to follow the TCJA. Additionally, they need to decide whether taxpayers who report NOLs in a different group at the state level will be limited to the amount they took at the federal level.

The TCJA provides 100 percent bonus depreciation for used or new property acquired and placed in service within the next five years. The TCJA also increases the limitation on the amount of depreciable assets a small business taxpayer can elect to expense under Code Section 179 to $1 million and increases the phase-out to $2.5 million. Governor Dayton’s proposed budget gives businesses a $100 million tax break by matching the TCJA with respect to Section 179 expensing and maintains the current rule, which requires that 80 percent of the depreciation is added back in the first year and recovered over five years.

The TCJA shifts from a worldwide to a quasi-territorial system of international taxation. This will trigger the repatriation of significant amounts of cash pooled offshore that will be subject to a one-time transition tax that taxpayers can elect to pay over eight years. The TCJA exempts from tax dividends received by U.S. corporations from foreign subsidiaries, retains the anti-deferral regime under Subpart F and adds a new regime that taxes foreign derived intangible income and global intangible low taxed income. Conforming to many of these provisions would provide a boost to Minnesota’s tax revenues. However, lawmakers need to figure out whether the 80 percent dividends-received deduction that is currently on the books in Minnesota applies and to what extent. In addition, lawmakers need to figure out whether to follow the TCJA’s lead and permit taxpayers to pay the state tax on repatriated earnings over the same eight-year timeframe so that they are not on the hook for the entire amount in year one. To complicate matters further, there are legal questions over states conforming to the new international tax provisions of the TCJA and their ability to tax foreign-source income that is zeroed-out at the federal level.

The TCJA was not at all charitable to charitable organizations. The doubling of the standard deduction means that roughly 20 percent fewer taxpayers will itemize their tax deductions, stripping them of the tax benefits from charitable contributions. Further, the lower rates for individuals, and especially corporations, will reduce the value of these deductions. Minnesota businesses are generous with giving back to the community, so lawmakers may want to use this as an opportunity to provide additional state tax deductions.

Recently a bill was introduced into the Minnesota House (HF 3656) that conforms to the current U.S. tax code as amended by the TCJA for individual tax filers, but there is no equivalent bill for corporate tax filers. Another set of bills introduced (HF 3811 and SF 3371) reduce individual tax filer rates by one percentage point each. Governor Dayton has made it clear that businesses must take a back seat to individuals in any tax bill that lands on his desk before the legislative session adjourns. Nevertheless, businesses should push hard for a budget that improves on the state’s  business climate and does not use the TCJA to impose additional taxes at the state level. Businesses have leverage for pushing for this because all sides are hard-pressed to pass a bill before the 2018 tax filing season.

Please reach out to Jessica Manivasager or John Erhart at Fredrikson & Byron P.A. with any questions about the TCJA or its implementation at the state level.