The Anticorruption Initiative Under the USMCA 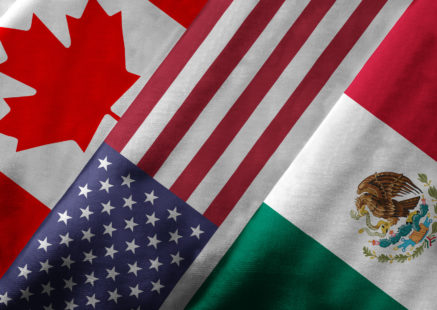 The North American Free Trade Agreement (NAFTA) entered into force in January of 1994. After over 28 years, the member countries—the United States, Mexico and Canada—have agreed to the terms of a new NAFTA, signing what is now known as the United States-Mexico-Canada Agreement (USMCA) on November 30, 2018. Upon ratification by the members’ respective legislative bodies, the USMCA will supersede NAFTA. It is expected that ratification will not take place until sometime in 2020. Until then, NAFTA will remain in force among the parties.

A lot has been said about the USMCA, and there are still concerns on how and whether the member countries will implement some of its provisions. Political commentators have been speculating on which member country came out ahead on the renegotiated pact, and the acrimony surrounding the negotiations leave everyone wondering whether the negotiations did more damage than good. Nonetheless, no one will argue that the new provisions on anti-corruption contained in the USMCA are a bad idea.

This article summarizes the USMCA’s anti-corruption provisions and addresses how this tool can be used by Mexico in particular to fight pervasive corruption.

One of the key provisions to USMCA is the anticorruption chapter, Chapter 27. Mexico proposed to include this chapter to standardize “measures to prevent and combat bribery and corruption in international trade and investment”. Chapter 27 is certainly beneficial for the three parties involved.

The main intention of Chapter 27 is to prevent and fight bribery and corruption in trade and international investment through the strengthening of the integrity of the public and private sectors.

What Does Chapter 27 Mean to Mexico?

While the three signatory countries have a responsibility to promote anticorruption policies in both their private and public sectors, Mexico has the longest way to go to achieve the implementation of ethic codes and anticorruption policies within its public and private institutions. Canada and the United States already have internal laws consistent with the anticorruption chapter of the USMCA: the Foreign Corrupt Practices Act (FCPA) in the United States, and in Canada, the Canadian Corruption of Foreign Public Officials Act (CFPOA). To fight corruption, Mexico must change its federal laws to implement the provisions nationally in order to back up its treaty obligations. Therefore, why should we trust that Chapter 27 of the USMCA will have an actual impact on corruption in Mexico?

Chapter 27 goes above and beyond any other international agreement on anticorruption matter, as it includes the definitions for things such as illicit enrichment, embezzlement, compliance programs and ethic codes of the companies, as well as cooperation between the authorities of the three countries. It is even considered, at least in Mexico, as more relevant to the future of the anticorruption fight than the Mexican Anticorruption National System recently created.

Also, NAFTA is one of the international agreements that Mexico complies with, unlike other international agreements. It can be said that Mexico has a clean record in compliance with NAFTA. Even with some uncertainty with the new government of President Andres Manuel Lopez Obrador, as to how it will handle international affairs, we are optimistic about Mexico’s commitment to the USMCA. Another fair reason is that, for the first time, Mexico will have measures and courses of action that are more concrete and aligned to the internal laws of the United States and Canada on the anticorruption matter.

If the USMCA is ratified, Chapter 27 will be felt more by Mexico, as Mexico will be obliged to adopt and follow anticorruption measures. The provision includes legislative, administrative and promotional anticorruption measures to be followed by the three involved parties; however, such measures are very similar to the FCPA and CFPOA already implemented in the United States and in Canada. Additionally, the Mexican federal government must invite the private sector to participate in the fight against corruption, which is not something the private sector is used to doing. With the new administration in Mexico, it is not yet clear how the federal government plans to do so. The chapter strongly states the training of government officials as a requirement, especially the ones in positions vulnerable to corruption. Again, something Mexico is not accustomed to doing.

Another important provision in this chapter is the protection of anonymous claims to the authorities, as Mexico is the country with the highest percentage of crimes not reported in the Americas. Studies show 94 percent of crimes go unreported by the affected parties due to lack of trust in the authorities, their competence and/or confidentiality, and due to fear of retaliation.

Some other interesting numbers related to the above are the following:

The ASF (Federal Audit Service), the office in charge of overseeing the Mexican public accounts, declared in 2016 that 97 percent of the reports made end up with no action taken. It then specifies that only 19 out of 656 claims made in the recent years have ever reached a court or a tribunal.

a) encourage enterprises to prohibit or discourage the use of facilitation payments; and

b) take steps to raise awareness among its public officials of its bribery laws, with a view to stopping the solicitation and the acceptance of facilitation payments.

One of the differences between U.S. and Mexican laws regarding facilitation payments is that under the FCPA in the U.S., though not encouraged, there are some exceptions as to when it is allowed to have facilitation payments; while in Mexico, as most other countries (i.e., UK and China) they are always prohibited. While facilitation payments are not strictly prohibited in the U.S., they contrast with other corruption acts in Mexico, as they are not considered a major issue even when it is the beginning of the corruption chain. Most companies, government officials and persons in general do not consider it a corrupt act; giving Christmas and birthday gifts to government contacts is common and is an ingrained cultural practice.

The above is an example of provisions within Chapter 27 that will require strong training in both the private and public sectors of the three involved parties to achieve compliance of the USMCA when doing international business.

Andres Manuel Lopez Obrador, the newly elected President of Mexico, commonly referred to by his initials AMLO, has been very vocal about his willingness to fight systemic corruption. However, his public discourse and clear political mandate has yet to be translated into a set of comprehensive public policies aimed at the institutional construction of the Rule of Law.

In that sense, the USMCA may be AMLO’s clearest path towards reform. Despite concerns of his reaction to the renegotiated trade agreement, the President has been supportive of the deal.

The President’s position on the USMCA, which is a set of standardized rules and regulations implemented at a supranational level, marks a noteworthy contrast to his domestic governing style. Critics argue that AMLO’s policies are aimed at weakening checks and balances, especially the ones provided by constitutionally independent and co-equal institutions. Also, they say, the President is exercising his executive authority at the greatest extreme.

Political and constitutional academics agree that the centralization of power is one of the most prominent features of AMLO’s presidency. Nevertheless, the USMCA, particularly its anticorruption provision, may be one of the President’s strongest constraints.

The treaty is now under the scrutiny of the United States Congress, and Congress has emphasized on the anticorruption chapter, along with other environmental and labor matters.