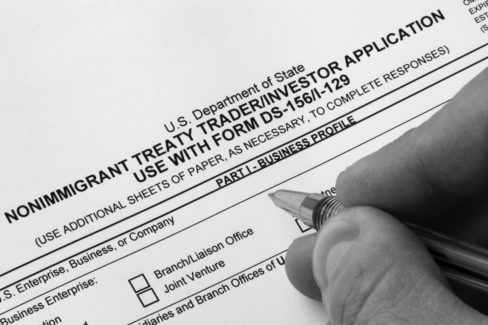 U.S. Citizenship and Immigration Services (USCIS) announced on January 23, 2020, that nationals of Iran and their dependents are no longer eligible to change to or extend their stays in E-1 or E-2 nonimmigrant status based on the 1955 Treaty of Amity, Economic Relations and Consular Rights between the United States and Iran due to the treaty's termination.

USCIS said that those who are currently in valid E–1 or E–2 status on the basis of the Treaty of Amity, including their family members who are also in valid E status, must depart the United States upon expiration of their authorized period of stay in the United States, unless otherwise authorized to remain in the United States (e.g., pursuant to a change of status to another nonimmigrant status or adjustment of status to lawful permanent residence). The changes described in the notice do not prevent Iranian nationals and their dependents from seeking admission in, or applying for a grant of, another nonimmigrant visa classification for which they believe they can establish eligibility under U.S. immigration law, the agency noted.