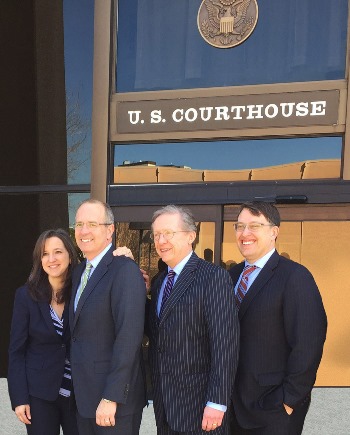 On February 26, 2016, Fredrikson & Byron attorneys John Lundquist (now retired), Dulce Foster and Kevin Riach won a hard-fought victory for Vascular Solutions’ CEO Howard Root in a federal criminal prosecution with far-reaching implications for medical device companies and FDA practitioners. Facing an indictment on four counts of misbranding under the Federal Food, Drug and Cosmetic Act and one count of conspiracy, Mr. Root made the exceedingly rare decision for a public company CEO to fight the charges instead of settling or stepping down.

The case was based on allegations that Mr. Root steered Vascular Solutions and its sales force to sell the company’s Vari-Lase® laser Short Kit for the treatment of perforator veins. The Vari-Lase®  system is a product line cleared by the FDA in 2003 for the treatment of varicose veins in the legs. The government alleged that the use of Vari-Lase® on perforator veins fell outside the FDA cleared indications, and was therefore an “off-label” use. The defense established at trial that the term “varicose veins” includes varicose perforator veins, so the disputed use of the device was not off-label.

A key issue in the case was whether the government can prosecute device companies for marketing a specific indication, if it falls within the general cleared indication for the device, without first obtaining the FDA’s permission. Although the FDA has published Guidance directing device companies to seek a new clearance for such specific uses, the Guidance is explicitly nonbinding on both the FDA and the public.

This case is also noteworthy because it is one of the first to establish clear limits on the FDA’s authority to prosecute off-label promotion, by drawing a distinct line between “truthful” and “misleading” speech. Senior United States D.C. District Judge Royce Lamberth presided over the case, sitting by designation in the Western District of Texas. Judge Lamberth is known for his watershed decision in Washington Legal Foundation v. Henney, which held the off-label dissemination provisions of the FDA Modernization Act of 1997 to be unconstitutional under the First Amendment. Judge Lamberth furthered his legacy in this case, instructing the jury that “it is not a crime for a device company or its representatives to give doctors wholly truthful and non-misleading information about the unapproved use of a device. If you find that VSI’s promotional speech to doctors was solely truthful and not misleading, then you must find the Defendants not guilty of the misbranding offense.”

The government presented its case in three weeks of testimony, while the defense rested without calling any witnesses. After deliberating for a day and a half, the jury entered a verdict of not guilty as to all counts in the Indictment.

Fredrikson & Byron’s White Collar & Regulatory Defense Group is one of the largest and most experienced in the Upper Midwest. We have broad experience in successfully guiding clients through everything from internal reviews of regulatory and ethical compliance to criminal prosecutions.