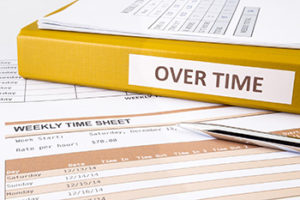 The Minnesota Supreme Court recently affirmed an employer’s liability for more than a half million dollars in unpaid overtime wages and an additional half million in liquidated damages because the employer’s split-day compensation system did not comply with the Minnesota Fair Labor Standards Act (MFLSA). This case is a very important reminder that when it comes to the MFLSA, strict compliance is all that will do. It also demonstrates to employers that the Department of Labor and Industry (“the Department”) is not required to create a rule or give employers warning before it argues for a novel interpretation of the MFLSA. In re Matter of Minnesota Living Assistance, Inc., d/b/a Baywood Home Care

In this case, the employer used a system by which its employees (in-home health aides), who were compensated for 16 hours of their 24-hour shifts, were paid straight time for the first five and a half hours and time and a half for the next ten and a half hours (the last eight hours were appropriately unpaid under Minnesota’s statute allowing for eight hours of unpaid sleeping time during a 24-hour shift). This structure was maintained for each day the employee worked, regardless of how many days per week. The company did not pay any additional weekly overtime to its employees. The MFLSA requires covered employers to pay overtime at time and a half to non-exempt employees for time worked “in excess of 48 hours” in a workweek.

The Minnesota Supreme Court agreed with the Department on both issues. It found the employer liable for overtime pay to its employees for all time worked after the 48-hour mark in a single week. The court also allowed the Department to calculate the regular rate on which overtime was owed using the straight time paid and all time and a half time paid during the first 48 hours of the employees’ workweek. The majority opinion expressed distrust for split-day compensation systems generally, discussing that, historically, these arrangements were used to avoid paying employees overtime under wage and hour laws. The result was that the employer owed overtime wages to its employees for all hours worked after the first 48 hours of the workweek at a rate higher than the time and a half it had paid during the first 48 hours.

The court also ruled that the Department was permitted to take a “litigation position” that was different from any rule it had previously made, without the notice and comment period required under the Minnesota Administrative Procedure Act for a promulgated rule. It did not matter that the Department had not promulgated a rule against split-day compensation plans. It only mattered that it had the better “litigation position,” according to the court.

Three justices dissented on the grounds that the Department relied on an unpromulgated rule in its decision against the company and that the majority’s interpretation of the MFLSA allowed for “pyramiding” overtime premium on overtime premium. The dissent also emphasized, “Minnesota’s Administrative Procedure Act requires the ‘formal adoption of rules’ when the proposed agency action has ‘the force and effect of law.’” The dissent described the majority’s decision as an endorsement of “a process that allows an agency to adopt and enforce an unpromulgated rule without public notice or comment, so long as the agency persuasively advocates for the unpromulgated rule against a party in litigation.”

As the dissent noted, this decision is a substantial shift from the court’s decision in St. Otto’s Home v. Minnesota Dept. of Human Services. “There, the agency’s ‘sudden departure from its past interpretation’ of the rule led [the court] to conclude that it would be ‘unfair and unreasonable’ to allow the agency to amend the rule without public notice or comment.” Here, the majority allowed the agency to do just that by recasting the Department’s unpromulgated rule as a “litigation position.”