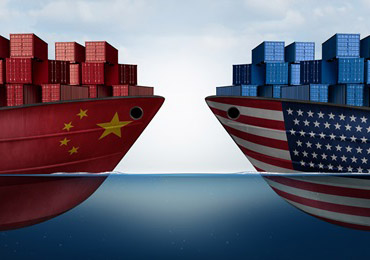 Early last Friday, August 23, 2019, before the U.S. stock market opened, China’s Ministry of Finance announced that it will apply new tariffs of between 5 percent and 10 percent on $75 billion worth of imported goods from the United States. The new tariffs were widely viewed to be focused on products in the Midwestern states.

The Trump administration responded later that day, announcing an increase in tariffs on $550 billion worth of Chinese exports to the U.S., meaning all China-sourced goods will be subject to some form of tariff.

These latest moves by Washington and Beijing sharply deepened tensions between the two countries and further clouded the prospect of a trade agreement before the U.S. presidential election later next year.

Trade relations have been on a steady decline for much of this year. On May 15, 2019, the Bureau of Industry and Security (BIS) of the U.S. Department of Commerce announced that it will be adding Huawei Technologies Co. Ltd. (Huawei) and its 68 non-U.S. affiliates to BIS’s Entity List to protect U.S. national security and foreign policy interests. This effectively banned U.S. companies from selling to Huawei and its affiliates without obtaining a license. BIS issued a 90-day temporary general license authorizing limited activities to Huawei and its affiliates. The Office of the United States Trade Representative (USTR) also started the official process to add up to 25 percent tariffs on Chinese imports worth an additional $300 billion.

In retaliation to Huawei’s ban, China’s Ministry of Commerce announced on May 31, 2019, that China will introduce an “Unreliable Entity List” regime, under which foreign entities or individuals that cut off supplies to Chinese enterprises for noncommercial purposes would be listed as “Unreliable Entities” (implementing regulations for the “Unreliable Entities List” have yet to be released).

BIS added five new Chinese entities to its Entity List, effective as of June 24, 2019, essentially barring them from buying U.S. parts and components without a license issued by BIS. Of these five new entities, two are entities leading China’s development of exascale high performance computing systems, systems capable of at least a billion billion (i.e. a quintillion) calculations per second.

On the sidelines of the G20 summit in Osaka at the end of June, it appeared President Trump and China’s President Xi agreed to hold off on new tariffs and restart trade negotiations. At President Xi’s request, Trump also suggested he would ease some U.S. restrictions on Huawei if China made additional purchases of U.S. agricultural products. U.S. and Chinese negotiators then participated in face-to-face trade talks in Shanghai on July 30-31, 2019, without substantial progress.

One day after the Shanghai talks ended, the Trump administration announced that the U.S. will impose a 10 percent tariff on another $300 billion of Chinese imports starting September 1, 2019. On August 5, the Chinese yuan depreciated below seven against the U.S. dollar. In response, the U.S. Department of Treasury officially declared China as a currency manipulator. Shortly after, relevant Chinese enterprises were ordered to stop buying U.S. agricultural products.

On August 13, 2019, the USTR delayed some of those tariffs, announcing they will be implemented in two tranches: September 1, 2019 and December 15, 2019. The Chinese goods related to the delayed tariffs included, for example, cell phones, laptops, certain toys, video game consoles, computer monitors, certain items of footwear and clothing.

Notwithstanding USTR’s postponement of above tariffs, China’s Ministry of Finance announced last Friday, August 23, 2019, tariffs of 5 percent and 10 percent on the $75 billion worth of U.S. imports mentioned above. The additional tariffs would also be implemented in two batches on September 1, 2019, and December 15, 2019, matching the timing of U.S. tariff increases. On the same day, China’s Ministry of Finance announced that the 25 percent and 5 percent tariff on automobiles and auto parts will be reinstated starting December 15, 2019.

What followed, as noted above, was Trump’s announcement of 5 percent tariffs on approximately $550 billion worth of Chinese imports. President Trump also directed American companies to start looking for alternatives to China. Over the weekend and the past few days, both countries have avoided rhetoric or actions that could further escalate tensions. There is speculation that trade negotiations will resume in the coming weeks, but most companies are settling into the realization that a resolution to the trade war is not expected in the near future.

Companies are also learning that the U.S. administration’s trade policies are not limited to China, and as companies look to diversify supply chains, it is not entirely clear which countries will be “safe” from future tariffs or related scrutiny. The U.S. has indicated it will look to address Vietnam’s lack of reciprocity in its trading relationship with America. Mexico’s relationship with the U.S. has also hit several rough patches during the past couple of years, and President Trump has yet to meet with Mexico’s President Obrador. Accordingly, we continue to assist clients in assessing the impact of the ever-broadening trade conflict and U.S. trade policies on their businesses and industries and evaluating options to mitigate the impact, including:

We continue to closely monitor developments and will provide updates on significant changes.

This client alert is published by Fredrikson & Byron and does not constitute legal or professional advice. Please consult a Fredrikson attorney with your questions.